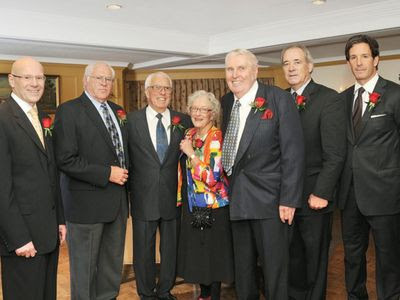 On Oct. 26, 2010, Gerry Meehan was inducted into the Etobicoke Sports Hall of Fame. He was inducted with fellow NHL star Brendan Shanahan. According to an article from InsideToronto.com:

"After a solid playing career, Meehan became general manager of the Buffalo Sabres and selected Pierre Turgeon with the first overall pick in the 1987 entry draft, instead of highly touted prospect Brendan Shanahan. Meehan said that choosing between the playmaking Turgeon and the power forward from Mimico was 'the toughest decision I ever made in my life... I think we made the right choice, but I can't be sure.'

" 'Growing up in Toronto and being a big Maple Leafs fan, I hated the Buffalo Sabres,' Shanahan later told Meehan, as the crowd chuckled. 'You made the right pick.' "

In this photo, Meehan is the next to last on the right, next to Shanahan who's on the end. Read more at the Hall of Fame's website.